How can we begin to describe a journey that has been… well, indescribable? It started innocently enough. Two boyhood friends had the idea to give wings and fingers a shot at the big time – promoting them from appetizers to entrees. So Zach and Tony rubbed two nickels together and opened a restaurant in the college town of Statesboro, GA. The food was great. And the response was even greater. Before long, there was so much demand for Zaxby’s restaurants, they had to franchise just to keep up. Besides, in their heart of hearts, they wanted to help other people own their own business too. They set up their headquarters in Athens, GA and began serving their franchisee family with the same attitude that had made them a hit with customers. The rest, as they say, is Hiztory. 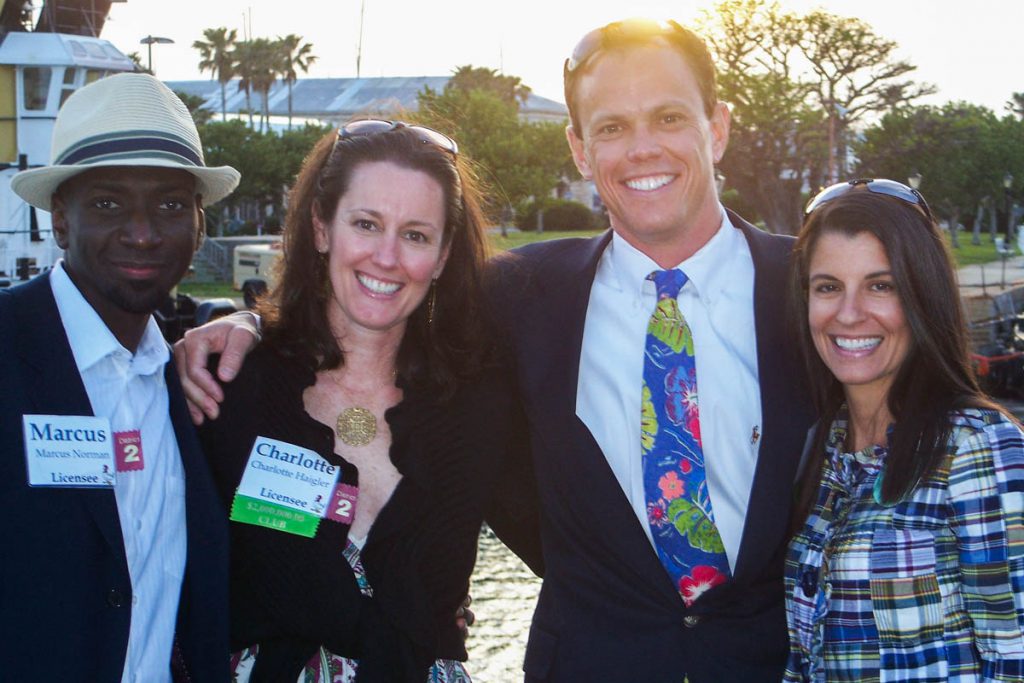 Owning a Zaxby’s is a little like joining a family without changing your last name. (If that sounds creepy, well, you have your relatives to blame.) Because to us, being part of the Zaxby’s family means having access to some of the best support in the foodservice business. We began as a family, building a local brand in the community. And now our family includes cousins, and sisters, and grand-children who are carrying on the tradition in communities across several states. Just like it was when we started, our mission is to consistently create encore experiences that enrich lives one person at a time. The more things change the more they remain the same.

Zach is our one and only. He’s been our one and only CEO since the Zaxby’s concept began. In fact, he and childhood friend Tony Townley dreamed up Zaxby’s in the first place. The two came up with the idea for an upbeat, fun, relaxing place that served terrific chicken. Now, more than a decade later, the chain is flourishing and poised to grow beyond anyone’s expectations. And it’s Zach’s vision that keeps us on that phenomenal growth track today.

Passionately committed to this vision, Zach even put his burgeoning music career on hold, selling his beloved drum set in order to open the first store. As more and more Zaxby’s fans are won over every day, we can be grateful that Zach traded in one set of drumsticks for another. Zach is a stockholder in almost 100 Zaxby’s restaurants.

An Athens, Georgia, native, Zach is also an alumnus of the University of Georgia in Athens. When he isn’t evangelizing for Zaxby’s, he’s relaxing with his wife and three children. He also loves hitting the links and the slopes. Asked to pick his absolute favorite Zaxby’s menu item, he hesitates like a man asked to choose his favorite child. “Since I have to approve every single item,” he says, “I like it all. But if I have to pick, I’d go with the Kickin’ Chicken Sandwich, because anything messy is usually good.”

Along with childhood pal Zach McLeroy, Tony Townley is one of the “founding fathers” of Zaxby’s. As he was from the very earliest days, Tony is responsible for the overall fiscal health of the company. He has plenty of experience doing that, as a former CEO for Southern Mortgage & Lending Corporation, and a mortgage originator for First Federal Savings & Loan and the Bank of Georgia. For more than two decades, Tony has also served as the secretary and accounting manager for Townley’s Christmas Tree Farm, one of Georgia’s largest Christmas tree farms. Tony holds a bachelor’s degree in management from Georgia Southern University and is a charter member of APICS, the American Production Inventory Control Society. Personally dedicated to the Zaxby’s vision, Tony is a stockholder in almost 100 Zaxby’s restaurants. When he isn’t enjoying time with his wife, three sons and daughter, Tony can be found taking in a good movie, fishing, hunting, or enjoying other outdoor activities. He’s a nice man, but not if you try to take a bite of his Zaxby’s Kickin’ Chicken Sandwich — it’s Tony’s absolute fave.

Blake Bailey is the chief financial officer for Zaxby’s Franchising LLC. He began his career with Zaxby’s Franchising LLC, as corporate controller when the Zaxby’s system consisted of 85 restaurants. During the past 11 years with the company, Blake has been instrumental in helping adapt ZFL’s financial infrastructure to support a 500-plus restaurant franchise system. He’s one of the reasons ZFL’s same-store comparable sales (SSCS) have increased every year for coming up on a decade. As one of our most valuable strategists, Blake works closely with the founders, helping them develop financial strategies for the future. His resourcefulness helped to fund equipment that improved operational performance and profits across the chain. Blake also serves a key role in franchise development working directly with prospective licensees. Blake’s highlight reel includes securing a $150 million credit facility that was subsequently paid off, leaving ZFL debt free. During his tenure with the company, Zaxby’s has been the fastest-growing chicken chain in the country.

Originally from Camden, SC, Robert Baxley attended the University of South Carolina and earned a bachelor’s degree in management from Valdosta State University. He began his career with ZAX in 1992 as a cook at the company’s third location in Valdosta, GA. Quickly promoted into management and serving as the company’s first VP of Operations, his operational expertise from years in the restaurant industry was utilized by the company to establish many of the foundational systems still in place today. In 1994, the company began franchising and changed its name to Zaxby’s, upon which time he was named the Chief Operating Officer of ZAX, LLC which operates more than 140 stores. From 1995 through 2007, Robert was also a successful multi-unit operator of 21 Zaxby’s locations throughout South Carolina, Georgia and Florida. Robert is a living example of his own motto that he instills in each member of the brand “Growth through the development of people.” He credits his success to surrounding himself with great talent and providing them the opportunity to grow. Staying focused on faith and family are core values he lives by. When he isn’t helping people grow or doting on his wife and college sweetheart, Mandy, and their two children, Wyman and Loy Brynne, he enjoys golfing, working out and coaching youth sports. After all these years, his favorite menu item is still the Kickin’ Chicken Sandwich because he insists that it was named for his beloved South Carolina fighting Gamecocks.

Zaxby’s Franchising LLC and its business partners are very sensitive to the privacy of visitors to its website.
The purpose of this online privacy policy is to describe what types of personal information we collect from visitors to our
website at www.zaxbysfranchising.com.